was born in 1976 as son of a musician and started playing violin at the age of 3. Later he joined the Toelzer Knabenchor, with whom he worked under such conductors as Herbert von Karajan, Claudio Abado and Lorin Maazel in Israel, Italy and Japan.

After the breaking of his voice he started playing saxophone and joined the youth jazz orchestras of Bavaria and Germany. Hans Werner Henze became one of his teachers for composition.

After school-leaving examinations he finished his study of jazz saxophone in Munich and studied 5 semester of classical composition in Hamburg, before moving to Berlin 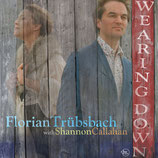